by Lindsey Winsemius - Posted 5 months ago 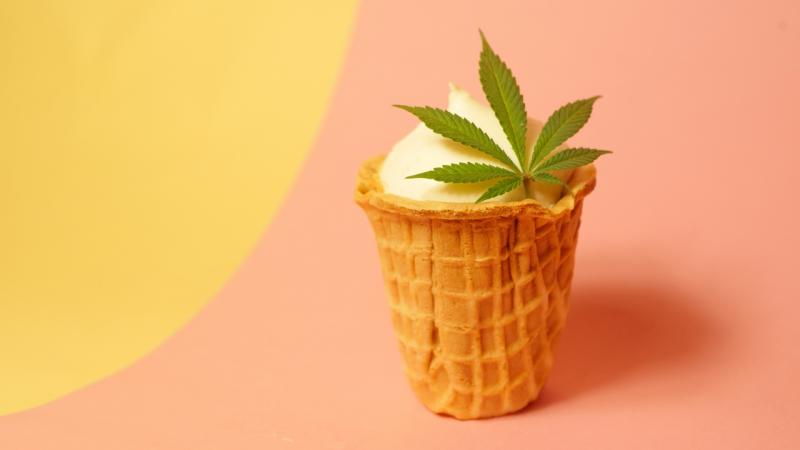 What is the Gelato Strain?

Gelato, also called “Larry Bird” or “Gelato #42”, is the result of Sunset Sherbet and Thin Mint Girl Scout Cookies strains.
The Gelato cannabis strain is a hybrid cross of Sunset Sherbert and Thin Mint GSC that tastes like one of those purple ice cream cones of frozen goodness also known as Gelato. Cannavatives' Gelato cultivar gives you all of the hashy, purple taste; without any of the calories or guilt. Born in 2014 from Cookie family members Mario Guzman (Mr. Sherbinkski) and Jai Chang (Jigga), Gelato usually produces dense, purple accented flowers with orange hairs wrapped around the nug like an exotic dancer hugs her pole.
Sunset Sherbet is a hybrid strain itself, made from crossing indica-dominant Girl Scout Cookies and Pink Panties. Thin Mint, made from a cross of Durban Poison and OG Kush, is a phenotype of the Girl Scout Cookies strain. This makes these the perfect combination for the popular Gelato strain.

Taking that first toke of Gelato is celestial and devine. The aroma is pungent, the taste is a mix of gas and sweet. The smoke is as smooth as it is flavorful; it hits like a ton of bricks on the backend, but provides a heady and memorable feeling up front. The majority of folks have reported feeling Relaxed, Happy, and Euphoric.

What does the Gelato Strain Help With?

Gelato is not so much of a “in the couch” type high as it is a relaxed, happy head high. Great for unwinding after the day, but you still have dinner to cook and the kids to get to bed, so you take a quick rip to feel relaxed kind of effects.
The kind of high you get from specific cannabis strains like Gelato are influenced by the terpenes and cannabinoids found in the strain. Read more about how cannabis strains are classified.
Want to know more about Terpenes? You can learn more about terpenes found in cannabis here.

The three most prominent terpenes found in Gelato are caryophyllene, limonene, and humulene, listed in descending order. But these vary by production facility. For a look under the Cannavative Gelato in particular, we have shared one of our certificate of analysis with you (you can ALWAYS ask your budtender to see the COA of any product purchased at a dispensary for future reference). At Cannavative, we take pride in ours.
Caryophyllene.  This terpene has an unforgettable flavor, calling to mind black pepper, cinnamon, cloves and oregano. Anti-Inflammatory. Functions also as a cannabinoid.
Limonene. Found in lemons. Antidepressant and anti inflammatory. This terpene has a lemony flavor, and activates adenosine receptors, increasing effects of THC and CBD.
Humulene. This distinctive-smelling terpene is also found in hops, which helps give some beers their earthy and spicy flavors. 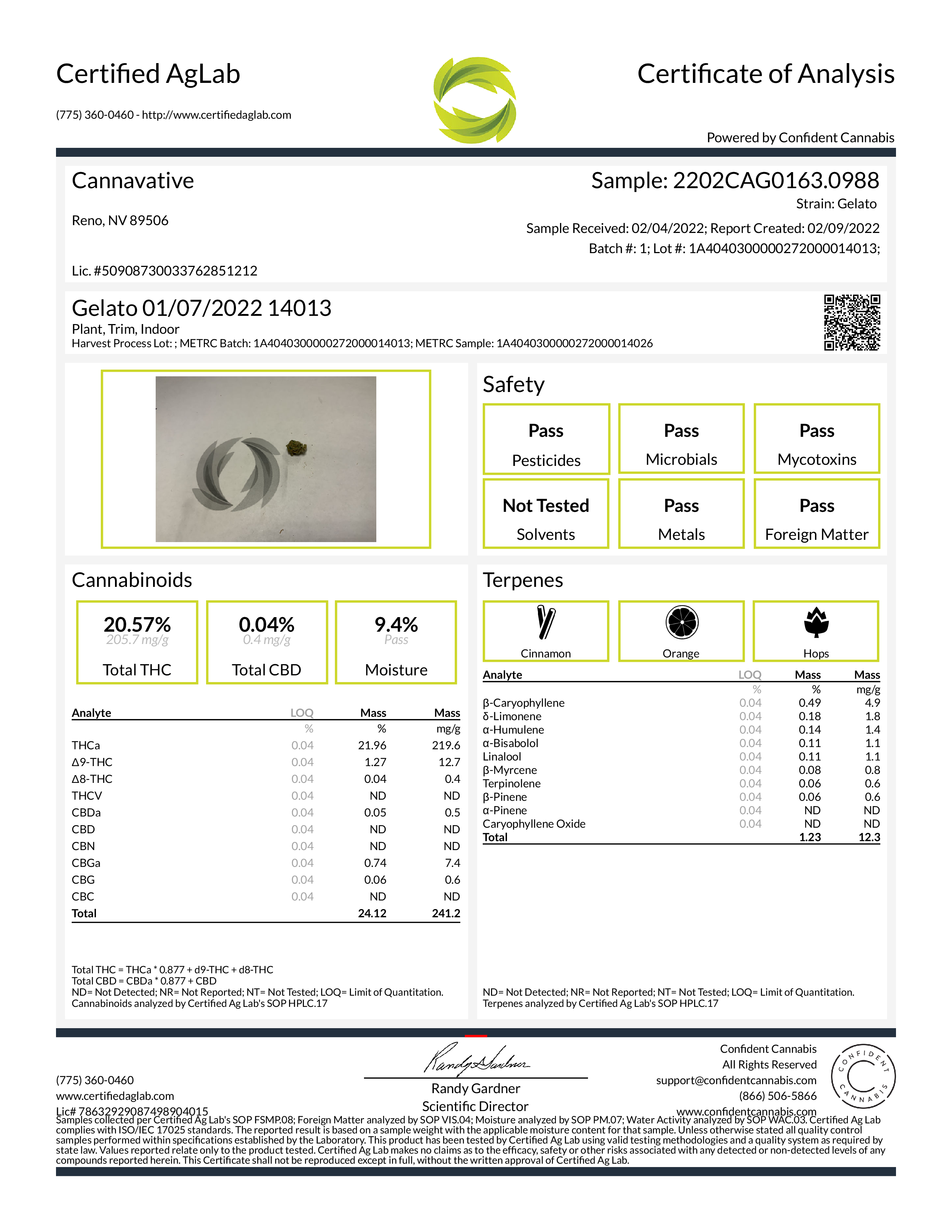 Why is the Gelato Strain so popular?

Asking why this is popular is like asking why people like the Italian Riviera in springtime; it’s simply divine. Our Gelato strain is no different with its sweet smell, attractive green bud with dark purple hues with fiery orange hairs. It tends to be a potent product, which will make you feel like you’re vacationing in Italy, even when you're simply hot boxing your car in the driveway.

Is the Gelato Strain “top shelf”?

This high-quality hybrid Gelato strain is considered top shelf.
What makes a strand “top shelf”? Top-shelf is a term that most dispensaries utilize when classifying there products (go ahead and ask your budtender next visit if you don’t believe us). In terms of cannabis flower, top-shelf weed will exhibit an aesthetically pleasing appearance, demonstrate desirable terpene aromas and flavors, and have a high cannabinoid content
As a general rule, when you enter a cannabis dispensary, flower products fall under one of three categories: low-, mid-, and top-shelf. These classifications are designed to reflect quality, and they're priced accordingly.
Check out one of our local dispensaries to find your own “top shelf” strains!