Everything You Need to Know About CBG

by Lindsey Winsemius - Posted 7 months ago

You may have heard about CBG, a cannabinoid compound being studied and sold in some places. We're answering all your questions about CBG.

What is Cannabigerol (CBG)?

Cannabigerol (CBG) is a type of cannabinoid obtained from the cannabis plant.

The Mother of all Cannabinoids

CBG is often referred to as the mother of all cannabinoids because other cannabinoids are derived from cannabigerolic acid (CBGA), an acidic form of CBG.
Most people are more familiar with other common cannabinoids obtained from cannabis plants, such as cannabidiol (CBD) and tetrahydrocannabinol (THC).
CBG is scarce, due mainly to the fact that it exists in smaller concentrations in the cannabinoid plant. For example, often only 1% of CBG can be found in most strains of plants, compared to the 20 - 25% of CBD or THC.
Due to this, CBG is often more expensive and not as easy to find as its more common counterparts, CBD and THC. However, it is becoming increasingly popular due to its health benefits.

What is CBG used for?

Like CBD, CBG has many possible health benefits for users. It can be used to fight inflammation, pain, nausea and works to slow the proliferation of cancer cells.
Research has shown it also significantly reduces intraocular eye pressure caused by glaucoma. Strains high in CBG will be beneficial treating conditions such as inflammatory bowel disease, Crohn's disease, and cancer.

How is CBG different from CBD?

CBG and CBD work on the body in different ways. To put it simply, CBG energizes the body, whereas CBD has a calming effect.
Some studies have found that CBD works more on the body - helping to relieve pain and inflammation. CBG, on the other hand, tends to work more on the neurological areas. This can vary by individual, of course.
This quick reference chart gives an overview of the main differences and medical applications of CBD vs CBG. 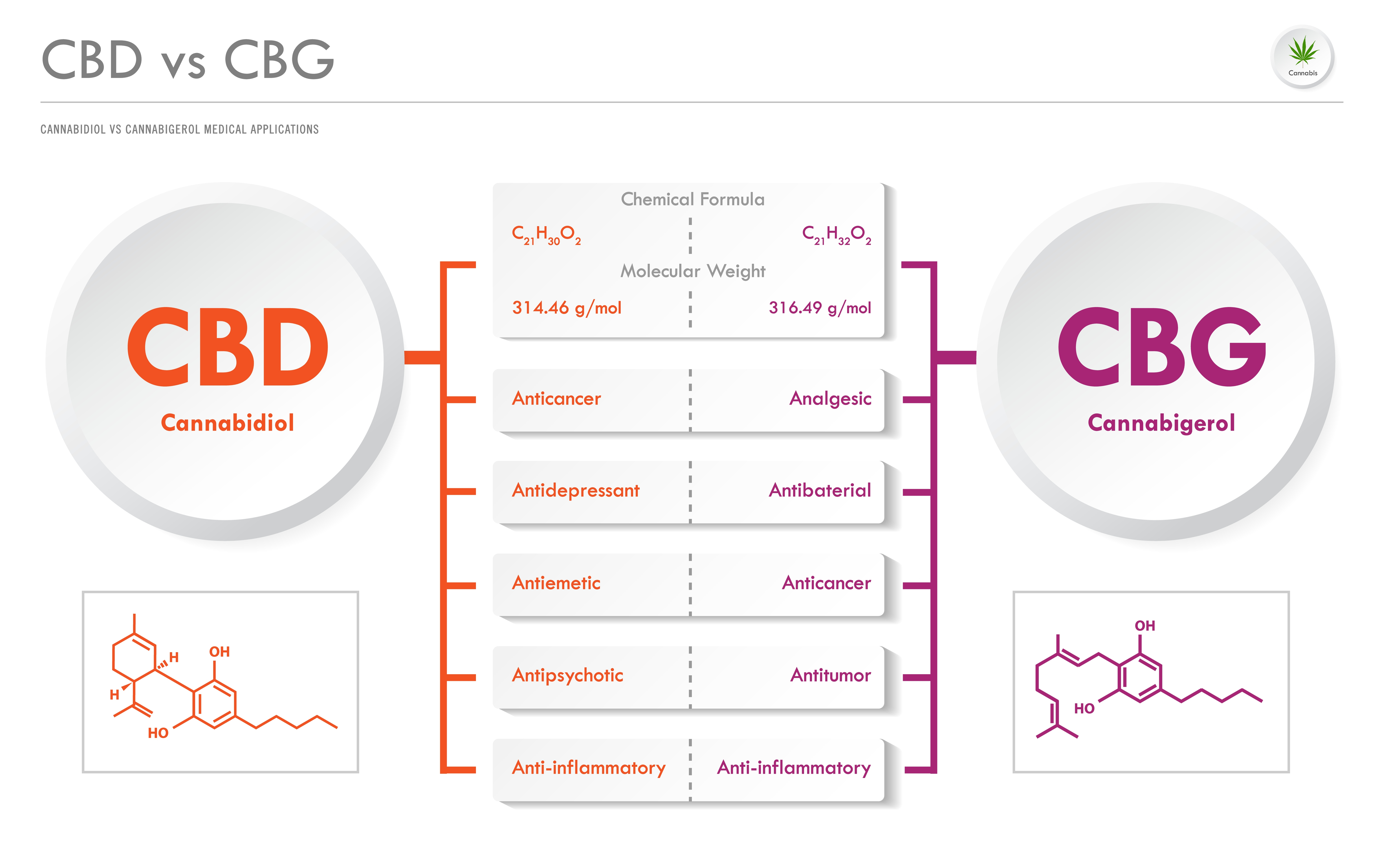 Will CBG get me high?

Unlike THC, CBG has no psychotropic effects, so it will not give you a high.

Is CBG more potent than CBD?

CBG is often harvested from younger plants, which contain the highest contraction. As mentioned above, both CBD and THC start as CBGA, an acidic form of CBG.
This is why younger cannabis plants contain higher concentrations of CBG. As the plants grow, much of the CBG converts into CBD and THC.

Yes.
Because CBG is derived from the Hemp plant, it is legal. And unlike CBD, it is less studied and regulated because it is relatively new.

Cannabigerol (CBG) is a newer molecule derived from the cannabis plant with many promising medical applications. As more research is done on this cannabinoid, more commercial applications will likely be uncovered.